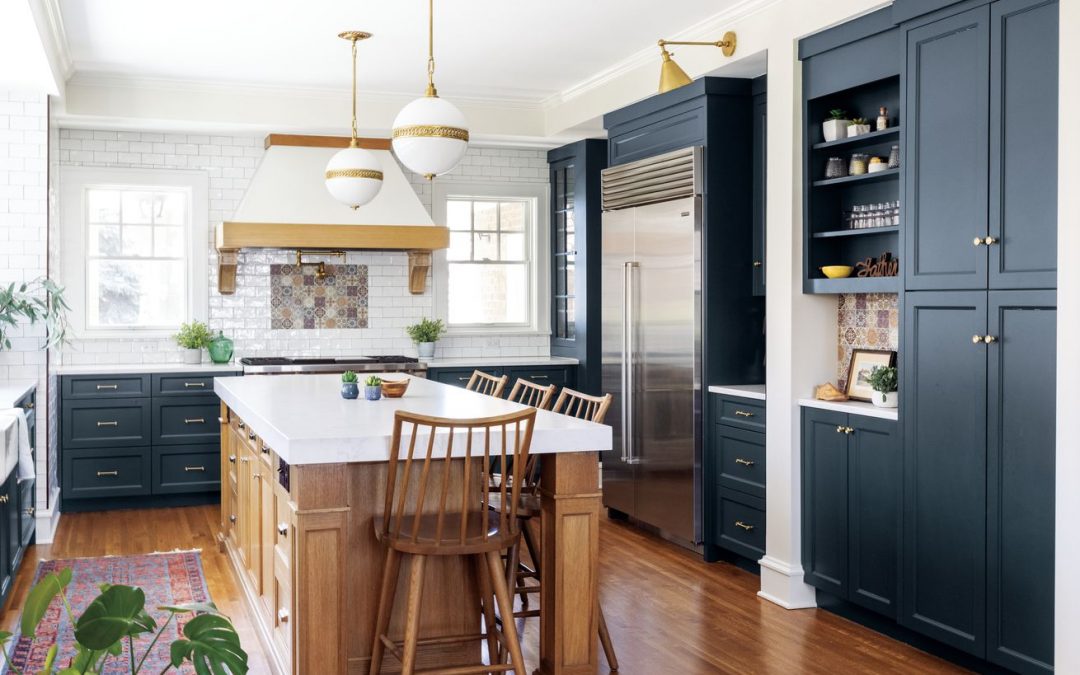 A welcoming kitchen was at the top of the wish list for the owners of this 1920s Colonial Revival. The resulting renovation delivered everything they hoped for while respecting the house’s heritage.

A real estate advertisement in the April 15, 1923, issue of the Omaha Daily Bee featured “one of the best brick homes in Dundee” on a large lot with “ample room for shrubbing.” Details about the newly built three-story house called out the large living room, sunroom, breakfast room, and billiards room, as well as its five bedrooms and three baths.

Today that same gracious Colonial Revival is located in central Omaha’s Dundee–Happy Hollow neighborhood, which is listed on the National Register of Historic Places. From the street, the house looks much as it did nearly 100 years ago, which was part of its appeal for current owners Brent and Emily Beller.

Dana Damewood
Lions stand guard at the entry to the handsome brick Colonial Revival, which looks virtually unchanged after nearly a century.

“I grew up in a newer part of town,” Brent says. “What attracted me to Dundee was that it was developed in the early 1900s and the homes are all of the same lineage.” (Of note: Warren Buffett, “the Oracle of Omaha,” still lives in the house he bought there in 1958 for $31,500.) Brent liked that the brick foursquare had “great bones—it’s very well built and solid.”

The Bellers came across it while house hunting before the birth of their fourth child. “We loved the classic brick exterior, with the white pillars in front,” says Emily. “Plus, there’s a large park nearby for the kids.” After moving in, they replaced the leaking red-clay-tile roof but did little else other than painting.

Dana Damewood
Pushing out the sink wall by 2 feet and the range wall by 4 feet gave the kitchen needed elbow room and allowed for an island large enough to seat the family’s four children. The bank of tall windows over the sink fills the now-14-by-16-foot space with natural light.

After a year, though, they missed some amenities of contemporary living, and decided to “bring the house up to current standards,” Brent says. “The house hadn’t been touched in thirty years.”

Dana Damewood
Left: The six-burner range is a focal point with a custom mantel-style vent-hood cover and an inset of patterned tile beneath the brass pot filler. Right: A high-arc bridge faucet in brass and an apron sink balance classic good looks with modern functionality.

Topping their list of most-wanted improvements: a more accommodating kitchen for their family of six, plus a mudroom addition to organize their comings and goings. Expanding the kitchen would allow for an island that could seat all four children, a coffee bar, and a more contemporary flow that would welcome guests.

“In our old house we entertained a lot,” Emily says, “and everyone always ended up in the kitchen. That wasn’t possible here.” A mudroom addition would get the back door out of the kitchen. A dedicated bath for the main bedroom was overdue, too.

Brent, a commercial real estate lawyer who admits to being “house-obsessed,” came across the work of interior designer and old-house advocate Carrie Derrick on Instagram (@urbanrestorative). He and Emily liked her aesthetic and her commitment to restoration, and got in touch.

Dana Damewood
The mudroom addition in the rear of the house allowed for a more convenient side entrance, as well as catchall storage for each member of the family. The built-in lockers, drawers, and upper cabinets were painted a bright vermilion red for an unexpected touch.

The bright-vermilion-red mudroom built-in is a high-energy departure from the blues and greens used elsewhere—sure to inspire kids to stow their outerwear in the right place.

“The Bellers’ house had been well cared for, but as with most homes built 100 years ago, it wasn’t designed for how we live today,” says Derrick, who launched her renovation business by buying and rehabbing old houses, then helping homeowners who wanted to do the same. Derrick suggested bringing on architect Jared Gerber, whom she knew from Restoration Exchange Omaha, a local nonprofit dedicated to historical restoration (Derrick serves on the board).

As Derrick and Gerber consulted with the Bellers, it became clear that the house would benefit from a few more functional improvements: The main bedroom needed more closet space, the first-floor laundry was awkward, and a covered rear entry would help to tie the mudroom addition into the rest of the house, preserving its gracious look. Above the mudroom, off the stair landing, Gerber suggested building a more usable deck in place of the small balcony that was there. To bring his plans to life, Gerber brought in Don Stormberg to act as general contractor.

Dana Damewood
Like most of the first floor, the front entry and staircase retain their original quartersawn oak millwork. A powder room is tucked under the stair landing, where a door with sidelights leads to the new deck.

Choose finishes that are difficult and costly to upgrade, like trim, tile, cabinetry and flooring, to reflect the period of the house. Have fun with light fixtures, paint, wallpaper, and fabrics, which are easy to change down the road. –Carrie Derrick, interior designer and principal, Urban Restorative

The Derrick-Gerber-Stormberg team got to work. To give the family the mudroom they needed, Gerber’s plan called for reworking a small room off the rear of the kitchen that had become the makeshift laundry and offered access to the finished basement (where the advertised billiards room once may have been). Gerber would set the “muddled” space right by adding a pantry closet around the corner from the kitchen, and opening up the back half of the room to the addition, adding a side entry. Derrick outfitted the space with its coat closet and built-in storage. Not that it all proceeded without a hitch: On the first day of construction, while digging the mudroom foundation, the crew discovered an abandoned oil tank that had to be removed, delaying their initial progress.

Dana Damewood
Folding French doors close off one end of the dining room from the front hall and the vestibule. At the other end (not shown), it now connects to the kitchen with a wide cased opening. New wallpaper, draperies, and an updated chandelier tie the room together.

To maximize the kitchen space, Gerber closed up a back door that opened into the existing 12-by-12-foot room, annexed a former butler’s pantry that held a tiny table and chairs, and created a large cased opening to the dining room. To accommodate a generous island, he pushed out the back wall by 4 feet, and the side wall by 2 feet. “An existing bumpout in the dining room set the precedent,” he says. “We did the same thing in the kitchen, matching the exterior brick, hip roof, and windows.” Uncovering an old coal-storage room along the side of the house required adding a beam to shore up the bumpout above it.

Stormberg’s crew upgraded wiring and plumbing in the new spaces, while Derrick updated the fixtures. Original doors and heavy cast-iron radiators either remained in place, or were redeployed as needed to accommodate Gerber’s plan. A new forced-air HVAC system, fed by heat pumps, went in; the boiler-fed radiators will add supplementary heat during Omaha’s frigid winters.

Elsewhere downstairs, the configuration of the entry, dining room, living room, and sunroom-turned-home-office did not change, though Gerber added picture-frame molding to the living room ceiling to break up its large expanse. The original windows, oak casings, and decorative millwork remain, updated with draperies, wall treatments, and new paint choices here and there.

Upstairs, existing spaces were reapportioned, with the exception of the 10-by-23-foot deck added off the stair landing. Gerber reconfigured an adjacent bedroom and bathroom to create a walk-through closet and dedicated bath for the primary suite. The other existing bath got all-new finishes, and a hall closet was built for the laundry, with the washer and dryer snugly side by side.

As the six-month project progressed—the family moved in with Brent’s parents for the duration—Emily enlisted a family friend, interior decorator Jacque Christensen, to help with new furniture, fabrics, dining room wallpaper, and a few last paint colors “to tie it all together.”

Dana Damewood
Presumed to have originally been a sleeping porch, this window-lined space became the main bedroom when the family moved in. The original cast-iron radiators supplement a new forced-air HVAC system when the weather is at its coldest.

The final result feels fresh and updated but at the same time, true to the era and style of the house. They may have added just 300 square feet of space, but, Brent says, “it has improved the way the house functions in a major way.” The enlarged, opened-up kitchen accommodates guests and kids’ gatherings without feeling crowded, and the new mudroom entrance makes family life easier—and tidier.

Dana Damewood
The new main bath is accessed via a walk-through closet off the main bedroom, utilizing space from an existing bedroom and bath. The quartz-topped custom vanity echoes the original quartersawn white oak millwork found throughout the first floor.

Just as important to the Bellers is the way the renovation has preserved the integrity of the house. “The structural additions are so subtle, they seem like they’ve always been there, but they’ve completely changed the feel of our home,” Brent says. “It feels open and warm, something we very much wanted.”

Dana Damewood
The deck above the mudroom addition has become a favorite retreat for the homeowners in the warm-weather months.

Asked if there is anything about the new spaces that they didn’t anticipate, he adds: “The deck is a huge surprise for us—it is Emily’s and my go-to place to wind down during the summer months. We sit and catch up about our days while watching the kids play in the backyard.”

The couple have found that extra outdoor living area to be a boon when it comes to entertaining, too, often gathering there with friends. Of course, no good thing stays secret for very long. “Our junior-high-school daughter and her friends have recently discovered it,” Brent says of their deck retreat. “We’ll see how that works out for us.”

The House: An existing brick Colonial Revival in Omaha, built in the early 1920s. Highlights included solid bones and good-size rooms. Downsides included a cramped kitchen, a makeshift laundry, and no mudroom or main bath.

Why they chose it: The house was well built and well cared for, and retained its historical character and extensive quartersawn oak millwork. It is located in a neighborhood of homes of a similar vintage, with a park nearby.

The Plan: Enlarge the kitchen, add a mudroom, move the laundry upstairs, create a primary suite, refresh the kids’ bath, and add an upstairs deck. Upgrade wiring and lighting as needed; retain the radiators to supplement a new heat-pump-fed forced-air system.

Teamwork: The Bellers hired designer Carrie Derrick to kick-start the project. She brought in architect Jared Gerber to reimagine the space; he called on contractor Don Stormberg to do the work. Family friend and decorator Jacque Christensen updated the furnishings.

Lesson Learned: “Be patient,” says Brent. “It’s painful to deal with the mess, and just wanting your house back. But it truly is very temporary in the grand scheme of things. It’s like raising kids. You have to enjoy the chaos, otherwise you’ll lose your mind!”

Small changes made a big impact: The kitchen was bumped out on two sides and absorbed a butler’s pantry. A rear mudroom was added, and the laundry moved upstairs, where a bedroom and bath became a closet and bath for the main suite. A deck went in where a balcony had been. Two bedrooms and a bath on the third floor (not shown) were untouched.