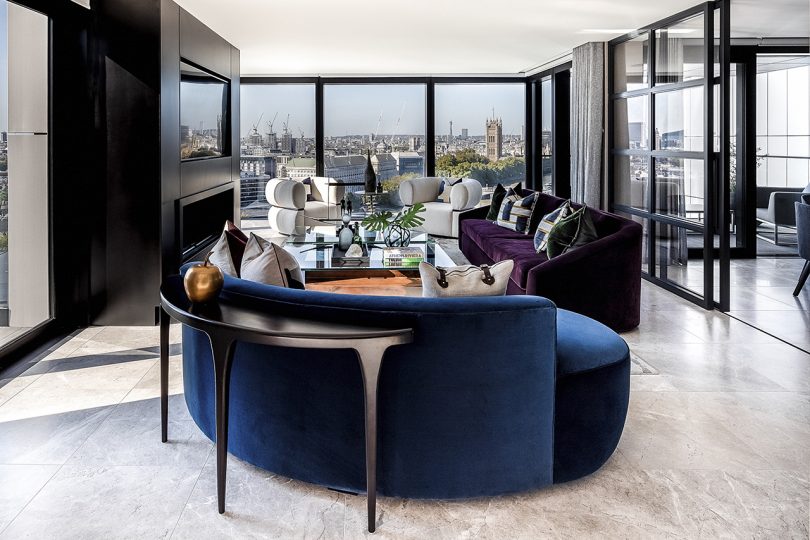 When interior designer Ed O’Donnell met Richard Angel at a London-based design studio in 2017, he had a sixth sense that they were going to create a business together. One year after that fateful encounter, Ed and Richard opened Angel O’Donnell with one pitch win and zero investment. Since then, they’ve become one of the most critically acclaimed interior design studios in the UK. On top of their awards success – which includes the coveted Overall Winner trophy from the Society of British & International Interior Design 2021 – they’ve earned a reputation for thoughtful discretion, friendly collaboration, and pin-sharp detailing, all qualities their UHNW clients prize.

From heritage properties to contemporary new builds, recent projects of Ed’s include a Cubist-inspired villa on the Greek island of Paros, two luxury penthouses in One St. John’s Wood, and a majestic apartment in The OWO Residences by Raffles in the heart of Whitehall.

As Creative Director, Ed approaches every brief with fresh eyes, unhampered by a singular signature style. This allows him to incorporate each client’s personality, aesthetic tastes, and requirements into his work. No one-size-fits-all process. No cookie-cutter style. Just beautiful, bespoke interiors impeccably delivered.

Today, Ed O’Donnell is joining us for Friday Five!

Just as I love small embellishments in an interior – a faceted wallpaper, an appliqué border on a curtain, a brushed fringe on a cushion – I live for these little details in a shirt, too. It could be a contrast button made from an unexpected material, like wood or metal. Or a placket front in a velvet trim. Or colorful stitching around the yolk or cuffs. It’s a little artistry in place of utility; details that elevate the functional to the first-rate. Paul Smith and Gresham Blake incorporate these sorts of details as standard, which is pleasing.

Everything you could possibly crave in a cinematic experience, Almodóvar delivers in the most spectacular way. Even if ambiguous femme fatales, fractured identities, gender conflicts, unrequited passions, frantic obsessions, and wanton jealousies don’t float your boat, the kaleidoscopic visuals surely will. Garish, clashing, kitsch – and always impeccably assembled. Great storytelling and characterization aside, every film he’s made is a masterclass in image-making, fashion, and interior design.

Smells, aromas, scents, perfumes, bouquets, whatever you want to call them, they’re intoxicating. I love how abstract and impossible to describe they are. Perhaps it’s because I work in a field where everything is visual and tactile, whereas a fragrance is airborne and invisible. Piquant, ambrosial, leathery, or light, none of these descriptions come close to capturing the emotional and physical response a smell can elicit. I’m rather fond of Penhaligon’s Halfeti right now, which, if you’re interested, smells of ‘vigorous grapefruit and rose tangle in the moonlight.’ Who knew?

There’s something oddly clandestine about fringe theaters. Their smallness somehow sharpens the senses and heightens one’s feelings of anticipation. The Playhouse Theatre in midtown Manhattan is a good one. So, too, is The Public Theatre, where I had the dubious honor of tripping up Glenn Close as she walked off stage following the execution of her daughter in ‘Mother of the Maid’. London’s also fab for fringe. Menier, Young Vic, Almeida, Soho Theatre – too many to list. They’re immersive, much like the recent production of Cabaret, which has transformed every inch of the Playhouse Theatre (London) into the infamous Kit Kat Club. It’s a must-see.

For me, post-piste bliss is a slope-side bar thronged with people of all ages. Great spots for people-watching and, much like airports or music festivals, normal rules of conduct don’t apply. Après-ski sessions are always good naturedly raucous, silly, and last hours longer than planned. La Folie Douce in Val d’lsère is a favorite haunt of mine, as is Basecamp in St. Anton. Both serve great food, too, which is essential.