How to Dispose of Old Gasoline 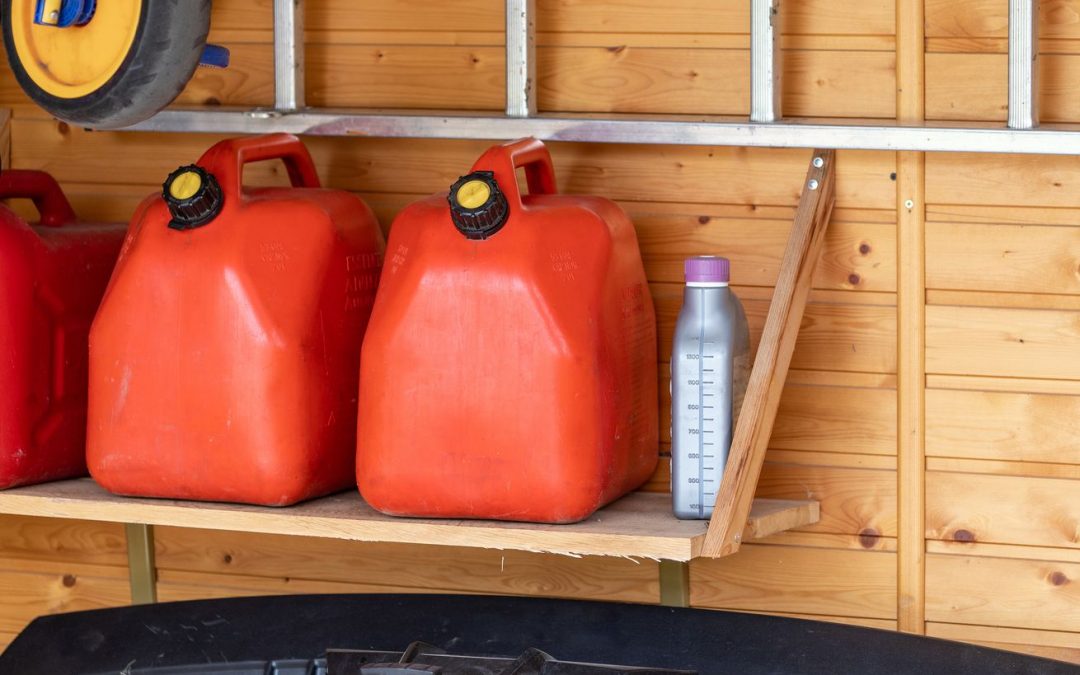 Did you know that the fuel for your vehicle or power equipment can expire? Here’s how to tell if it’s no longer ok to use and find out how to safely transport and get rid of it.

Gasoline-powered vehicles and machines are everywhere. Though they are essential for many people to get around and get things done, the petroleum-based fuel that makes them work can be a serious health, environmental, and fire hazard if not stored and transported properly.

Gasoline also has a limited useful life, so it’s important to only buy as much as you expect to use before it starts to go bad—or take steps necessary to make it last a bit longer. We’ll walk you through the essential considerations so you can safely and efficiently manage the fuel for all the gas-powered things in your life.

Use It or Lose It

Gasoline does degrade over time, so you should be mindful of how old the gas is in your vehicle and power-equipment fuel tanks. Fortunately, it takes months for the quality to drop enough to be concerned, so the gasoline in the car you drive every day or the lawnmower you use weekly should be just fine.

But if you own gas-powered machines that only get used occasionally, such as boat motors, classic cars, or chainsaws, running them on old gasoline could cause them to perform poorly—and even damage the engines.

Gasoline is mostly made up of hydrocarbons—the components refined from crude oil that provide a source of power when burned in your engine—plus a bunch of chemical compounds, some of which are added to inhibit corrosion and to keep the fuel stable. But even with the beneficial additives, gasoline will ultimately evaporate and oxidize over time, breaking down into a sludgy varnish that can gum up the engine fuel system.

Even if the gasoline itself is still in good shape, rust, dirt, and other contaminants can find their way into the tank and ultimately into your fuel filter, carburetor, or fuel injectors, causing sluggish performance or stopping your engine altogether.

Two other substances often found in gasoline that are tough on fuel systems are water and alcohol, both of which can cause corrosion inside engine parts. Water is absorbed into the gasoline from direct contact or from moisture in the air. Meanwhile, alcohol is actually a fuel additive that can separate out of the gasoline over time. If the amount of absorbed water gets too high, it will force the alcohol out of the gasoline, and these two substances will sit on the bottom of your tank, potentially getting pulled into the fuel lines where they can wreak havoc.

Surprisingly, there’s also a good chance that fungus or bacteria will contaminate fuel that’s been sitting around for a while, especially if temperatures, where the gasoline is stored, fluctuate enough to cause a lot of condensation within fuel tanks.

How to Tell If Gasoline is Not Good

Your eyes are the most useful tool for deciding when it’s time to dispose of old gas, and the first thing to look for is contaminants. Inspect your gasoline for rust and other foreign particles, which will sit in a dark, gritty layer on the bottom of the tank. Any amount of sediment in your gas can clog up your fuel system, so it’s wise not to run a vehicle or machine with grit in the tank.

Another way to identify bad gasoline is by its color and clarity. Fresh gasoline will be crystal clear and almost colorless with a slightly amber hue. As the fuel oxidizes and breaks down over time, and varnishes and other impurities settle out of it, it will gradually get darker and darker, turning to more of an orange or brown color. Eventually, as it gets older, it will also go from clear to cloudy. If you know that your gas has been sitting for a long time, you should inspect it before use because fuel that has even a slight change in color or clarity could lead to a significant decrease in your engine’s performance or reliability.

A third way to check for bad gas is the smell test—be sure to give it a quick sniff; don’t take in a full breath of fumes. New gasoline has a clean and distinctive odor that most people will recognize; old contaminated gas, on the other hand, can have a musty, stale, or sour scent due to the varnish and other impurities formed by decomposition. If you don’t quite know what bad gas smells like, imagine a moldy basement or an old can of lacquer. If it smells anything like those, it’s got to go.

How to Make Gas Last Longer

The easiest way to extend the shelf life of your gasoline is to store it properly. This means keeping it in modern plastic fuel cans, using storage cans that match the amount of fuel your power equipment will use in less than a few weeks, and ensuring that the cans are in good shape.

Store the gas cans in a cool, dry place in a building other than your home, both to keep the flammable fuel away from your family and valuable property as well as to keep fuel evaporation and water condensation to a minimum. Avoid storing gasoline in old-style metal cans, which can rust and contaminate the fuel. And never put gas in glass jars or other unapproved containers.

If you own gas-powered machines that tend to sit for months, such as power equipment that gets put away seasonally or recreational vehicles that see infrequent use, you can add a fuel stabilizer to new gasoline to make it last as long as a year or more. Sold by companies such as Sta-bil, Star Tron, and Sea Foam, these concentrated fuel additives are formulated to minimize absorption of water and slow down the chemical breakdown of the hydrocarbons that make up your gasoline. But stabilizers only help to prolong the life of fresh gas; they won’t fix old gas.

The Best Way to Get Rid of Old Gas

If you ultimately determine that your gas is not usable, you’ll need to find a responsible way to dispose of it. In general, state environmental protection departments are in charge of determining how individuals should deal with hazardous wastes, such as unwanted petroleum products.

That’s why rules for proper disposal of unusable gasoline vary from state to state and can even differ locally. You should first check with the town, city, or county you live in to find out what regulations apply to you. The last thing any municipality wants you to do is to create an environmental or health hazard, so there will be a protocol to follow no matter where you live.

A quick web search for one state’s environmental protection agency found a detailed webpage describing how to deal with unwanted gasoline and other fuels. Of course, the agency’s first recommendation was to not create unwanted gas in the first place; this was followed by several obvious tips for keeping fuel waste to a minimum, such as not filling up power-equipment fuel tanks near the end of the gardening season and adding fuel stabilizer to new fuel to extend its life.

But if your gasoline needs to go, the answer will almost definitely be to take it to your local hazardous-waste disposal center. If you don’t know where that is, call your town or city hall and they will put you in touch with the local recycling coordinator or department of public works.

It’s common for municipalities to collect used gasoline and other hazardous waste at no cost to you a few times per year at special waste-removal events. A schedule for these events should be posted on your town’s website. If you don’t want to wait until the next scheduled waste-removal event, the alternative is to find a commercial waste-disposal service, which will typically charge a hefty fee to take your unwanted fuel.

Whether you’re buying new gas or getting rid of old, the same guidelines for storing flammable fuel should be followed when moving it around. That means you should only use approved gas cans, and never put containers of gas inside the passenger compartment of a vehicle. Ideally, transport gas cans in an open pickup truck bed or open trailer, but if you must use the trunk of your car, be sure the cans are well sealed, so they don’t spill. Also use sturdy rope or straps to tie the cans down so they don’t fall over and take them out of the vehicle as soon as you get to your destination. Never leave gasoline containers in a hot, enclosed space in a car or truck. And it should go without saying that you need to keep them away from any sparks, flames, or hot surfaces.

Carefully Clean Up Any Spills

In the unfortunate event that you do spill some gasoline, the first thing to do is put on some fuel-resistant nitrile gloves and a pair of safety glasses to protect yourself. Then quickly spread something on the spill to absorb as much of it as possible. Kitty litter, the old standby for cleaning up oily messes, is cheap and effective at absorbing gasoline, but it’s not the easiest thing to pick up once it’s saturated. Instead, for not much more you can buy special pads or granules made specifically to sop up hazardous fluids.

If the gas was spilled onto an absorbent surface, such as the carpet in the trunk of your car, it can be tough to remove all the gasoline, so you may need to dispose of the item you spilled it on too. On the other hand, once spills are cleaned from nonabsorbent surfaces, just let the surface air out so any remaining gasoline will evaporate. After that, wipe a rag or paper towel soaked in vinegar onto the surfaces to help dissipate the smell. If that doesn’t completely eliminate it, follow up with a citrus-based cleaner/degreaser and some paper towels.

Whatever you use to clean up the mess will have to be put into a heavy-duty plastic bag or a bucket, and you will need to dispose of it the same way you get rid of old gas—at a municipal or private waste disposal facility.

“Recondition” Old Gas at Your Own Risk

The internet is full of videos demonstrating methods for filtering old gas so you can continue to use it, sometimes suggesting adding it in small amounts to good gas, rather than letting it go to waste. Though many of these people claim they have made the old gas “like new” again by cleaning out the impurities, the stuff they’ve removed is often the remnants of ingredients that made the gasoline a high-quality fuel in the first place, so you risk doing more damage, or at least getting poor performance by running it in your engine.