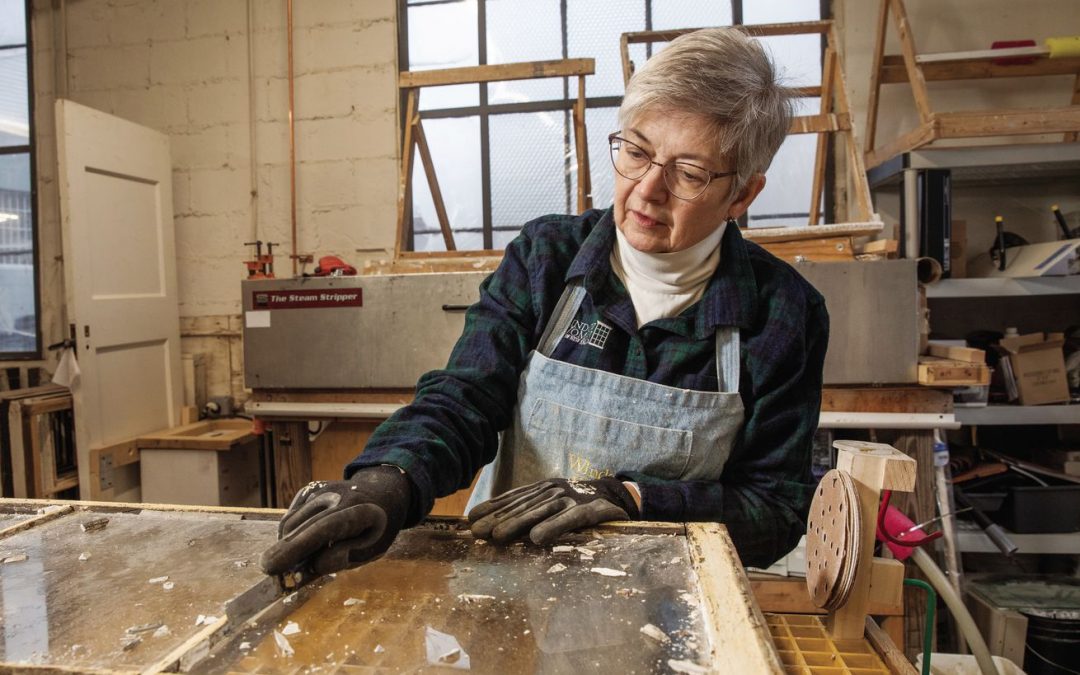 PRESERVING HISTORY. Alison Hardy removes old putty and paint from an antique window in her workshop. “A lot of times, people will look at old windows and say, ‘That’s too rotted; you can’t fix that,’ ” she says. “But most of the time, it’s just the paint that’s bad—once you get that off, you see how beautifully built they are.” | Alex Gagne

In an expansive workshop on the North Shore of Massachusetts, Alison Hardy—a.k.a. the Window Woman of New England—and her small team of skilled workers are meticulously restoring dozens of weathered, century-old sashes.

When Alison Hardy started her window-restoration business back in 2003, it was a one-woman show based out of her garage. Kevin O’Connor was one of her first clients.

Hardy’s task: to rehab dozens of ornate yet inoperable windows, including 20-over-2 double-hungs and some arched sashes, from the 1893 Queen Anne that Kevin—who had not yet been tapped to host This Old House—was renovating with his wife. “Alison really is an artisan,” he says today of the masterful work she did. “Those intricate windows added so much charm to the house. Seeing them go back in completely restored and functional—it was a spectacular moment.”

Hardy found her calling in restoration after she and her husband bought a 1782 farmhouse in the late 1990s. After two centuries of wear, the windows were drafty and rotting in spots; many had broken sash cords or were painted shut.

Her modest goal at first: “I just wanted to get the windows to open.” She borrowed woodworking tools from her husband, picked up detailed reference books such as Working Windows by Terence Meany and Repairing Old and Historic Windows by the New York Landmarks Conservancy—this was many years before YouTube—and slowly, over several months, taught herself to fix them.

Today, she operates out of a 5,000-square-foot workshop in Amesbury, Massachusetts, where she works on more than 1,500 windows each year. She has trained a dozen-strong team to help, their backgrounds as varied as the windows they coax back to life. There’s a former recording engineer, a home health aide, even a private investigator, all drawn to work “where they see the results of their labor at the end of the day,” Hardy says.

Many of Hardy’s employees have developed into specialists over the years: Mary Salach is an expert glazier, Dylan Runnion is Hardy’s go-to woodworker, and Elaine “Lainey” Kenney is known for her precision with a paintbrush. They rely mostly on hand tools for their careful work; sometimes that involves repairing a damaged sash, but a lot of it boils down to less-elevated tasks. “Really, truly, 90 percent of what we do is paint scraping,” Hardy says. Right now, the team is busy restoring some 50 original windows removed from the Dracut Centre School, an 1898 schoolhouse that’s being converted into affordable housing for veterans (see sidebar, right).

High-profile jobs like this one help Hardy convince more people that old windows are worth saving. When homeowners open a window to find the bottom rail rotting from decades of pooled rainwater, they tend to see a lost cause. But because antique windows are typically made from dense, old-growth wood, they’re built to last and designed to be disassembled and repaired over and over again. And when paired with weatherstripping and a storm window, a restored single-pane window can be nearly as energy efficient as a new double-pane window, making repair a more cost-effective choice.

Of course, the original windows are likely the perfect fit for any historical structure, both physically and architecturally—modern windows can never totally replicate their elegant proportions and refined muntin patterns. “Old windows are just so beautiful,” says Hardy, who still marvels at the craftsmanship they display. Once restored, windows that have been around for a century can last another 100 years, she adds. “You can’t find a new window with that kind of warranty.”

A steam treatment softens putty and loosens the bond of the paint to the wood. Here, Hardy puts a window into an insulated stainless steel cabinet that holds up to two sashes at a time as it fills with hot steam; the window will stay in the steam box for up to an hour. Its mechanics have already been assessed: Damaged sash cords were removed, and hardware was set aside to be cleaned and repaired. They’ll be replaced on-site when the window is reinstalled, ensuring it opens and closes smoothly.

Hardy’s team uses a variety of tools to remove layers of old paint from windows, including scrapers, random-orbit sanders, and handheld vacuums with HEPA filters. But she never uses chemical paint strippers: “They make a mess and can damage the wood,” she says.

Since old windows are likely to have traces of lead paint, Hardy dons a custom-fitted respirator; the shop’s workbenches are topped with fiberglass grates and equipped with downdraft fans to suck dust and debris through a prefilter and a HEPA filter. To remove stubborn paint, she pairs a scraper with an infrared heat gun designed to operate at a low enough temperature that it won’t vaporize lead paint.

Once a window is down to the bare wood, any necessary repairs can be made. Here, woodworker Dylan Runnion makes a dutchman repair by cutting and chiseling out a rotted portion of the sash.

Runnion sizes the patch to be secured with epoxy. Hardy says she was lucky to recruit him. “Finding someone who likes repairing woodwork is rare,” she says. “Mostly they want to build new instead of fussing with the old stuff.”

The window is ready for glazing. With the exterior facing up, Mary Salach pushes a bed of putty into the rabbet, which keeps the glass from rattling.

If the original glass can’t be reused, a replacement piece—sometimes pulled from Hardy’s extensive collection of salvaged panes—is cut to fit. Salach then beds the glass snugly in the putty. She secures it by setting tiny metal glazing points around the pane.

Salach pushes more putty into place against the rabbet. She runs a putty knife at an angle along the rabbet to shape a clean, beveled edge, which helps ensure that water sheds away from the wood. The putty knife has a rounded edge that won’t scratch the glass.

The putty typically takes 2 to 3 days to dry; then the window is primed and painted by Lainey Kenney. She doesn’t use spray paint or masking tape— just brushes and precision. Kenney paints over the putty to seal it, and all but the outside edges of the sash that slide against the window jambs get paint. “This allows moisture to escape,” Hardy explains. Weatherstripping is applied when the window is on-site and ready to be reinstalled.

Adaptive Reuse for an 1890s Schoolhouse

Generations of students attended the Centre School in Dracut, MA—some of their names are inscribed in the slate roof tiles, no doubt etched during flagpole duty—but the 1898 building has stood largely empty since the 1980s. Now a local nonprofit, Coalition for a Better Acre, is preserving the building while converting it into nine affordable housing units intended for veterans—and This Old House is documenting the transformation as part of its 43rd television season.

Courtesy Dracut Historical Commission
This photo of the Dracut Centre School shows what the building looked like in the 1940s, when it was still a functioning elementary school.

Many of the building’s original details are still intact, including its wide maple and pine staircases and the 50-some-odd windows being restored by Alison Hardy’s team. The mostly six-over-two double-hung windows were in rough condition: Much of the glass had been replaced with plexiglass, and the exteriors left unpainted for years.

But the biggest challenge has been the round window that punctuates the front gable’s peak. “It was a mess,” Hardy says, found in pieces on the attic floor; only the frame remained. Dylan Runnion built a new window from scratch to match the original, using a photo of another historical building by the same architect as reference. “All of our projects have stories,” says Hardy. “I like that this one celebrates both the past and future of this building.”

After glazing a window, Salach dusts the glass with whiting powder to remove any linseed-oil residue that the putty left behind.

Right: It’s not unusual for an old window to have some cracked glass, so Hardy keeps a collection of spare windowpanes of nearly every conceivable size and vintage. Some homeowners love the wavy look of antique glass, she says, but others don’t.

Left: In the attic above her workshop, a 19th-century building that may have been built as a horse-carriage garage, Hardy stores antique sashes in common sizes. “I keep telling myself I’m not a hoarder,” she jokes.

Left: Salach uses a glazing point driver, which looks like a staple gun, to install tiny metal glazier points into the muntins. These will hold the glass in place.

Right: Hardy carefully removes a glass pane before fully sanding down the rest of the sash. After a run through the dishwasher, the glass will be reinstalled.

Having worked in the textile industry for years, Hardy is uniquely skilled at color matching. She keeps an assortment of primers, paints, and stains on shelves in the paint studio. It takes trial and error to find a product that cures well, so the window won’t stick; Hardy’s team uses an oil primer and either an oil or latex top coat.